Why Clinical Trials Fail - Know It All

So, why do clinical trials fail, and what can be done about it?

In June of 2016, BIO (in conjunction with Biomedtracker and Amplion) released a study analyzing clinical drug development success rates over a period of a decade (2006-2015). The study analyzed a total of 9,985 clinical and regulatory phase transitions from 7,455 development programs across 1,103 companies. A phase transition is defined as the movement out of a clinical phase—for example, advancing from Phase I to Phase II development, or being suspended by the sponsor.

The study found that the overall likelihood of approval (LOA) for all development candidates to make it to market was 9.6% or about 1 in 10.

The study reported that success rates were lowest during Phase II. This is likely because Phase II is generally the first stage where proof-of-concept is tested in human subjects. Phase II is also the point in development when the sponsor must decide whether to pursue a larger and more expensive Phase III study and may decide to terminate development for a variety of reasons, including commercial viability. 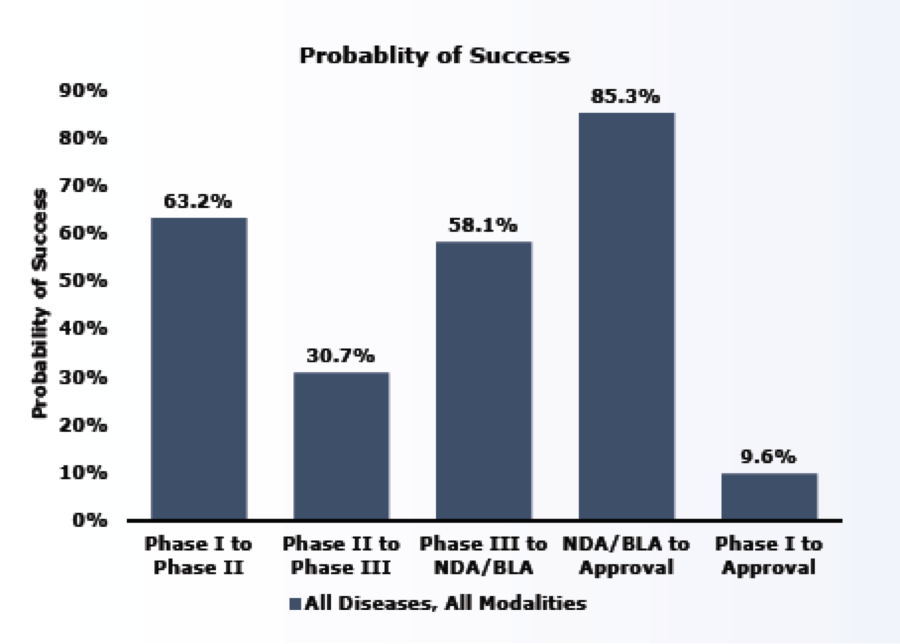 The study also segmented phase transition success and the likelihood of approval by disease and found a wide spectrum of LOA ranging from 26% for hematology to 5% for oncology.

One of the more interesting revelations that came out of the study was that while many factors can contribute to a failed clinical trial, the use of biomarkers has a direct effect on clinical trial success. When biomarkers were used as inclusion or exclusion criteria for enrolling patients in clinical studies, the LOA jumped from 8.4% to almost 26%, or triple the success rate. 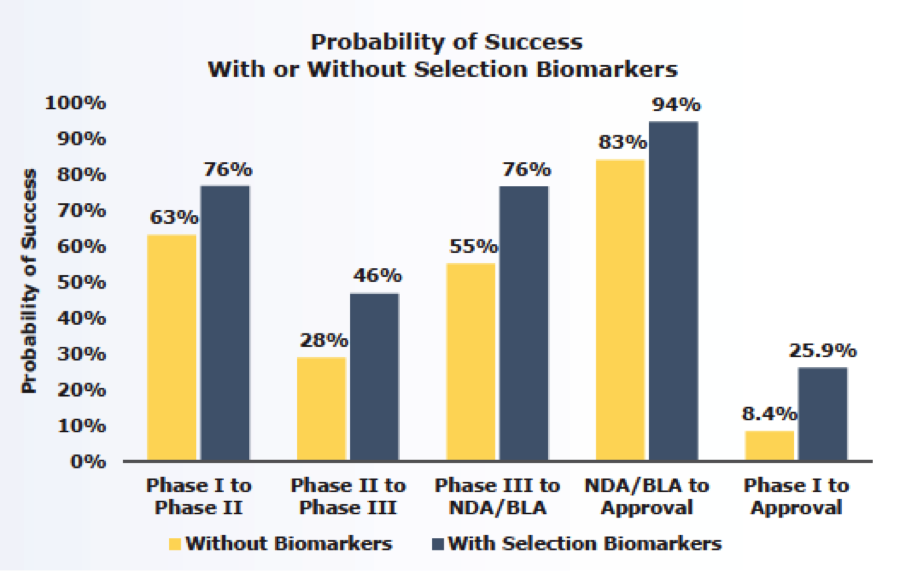 Biomarkers allow for the identification of patients who are most likely to respond to a developmental drug, which increases the chance that a therapeutic benefit will be demonstrated.

Ralf Huss, Chief Medical Officer of Definiens, a company that uses sophisticated data mining methods for biomarker discovery, argues that while pharma has been talking about precision medicine for more than a decade and has been very vocal about the need for biomarkers and complimentary/companion diagnostics (CDx) to advance patient treatment, particularly in oncology, the industry as a whole has not yet demonstrated a real commitment to applying a deep understanding of biology and the immune system to develop robust and meaningful biomarkers.

Huss believes the reason for this lack of commitment is because identifying robust biomarkers is both difficult and expensive. And, even when a promising marker is found, it could fail. Despite the challenges, Huss states, “If the industry wants to reduce the rate of clinical trial failures and the costs that come with it, it needs to get serious about devoting resources to biomarker programs and rethinking its approach to clinical trials.”

Although identifying biomarkers is challenging, so is the reward. The FDA estimates that just a 10% improvement in the ability to predict drug failures before clinical trials begin could save $100 million in development costs per drug.

To learn more about how ShareVault is ideally suited for streamlining the drug development process, click here.